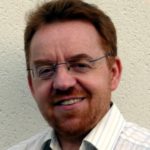 FRI: As a final funny TREAT - a Dr Who Spot the Difference quiz to test your powers of observation! See here: http://bit.ly/cCixM5 Many thanks for all your Qs - have loved talking to ALL of you!