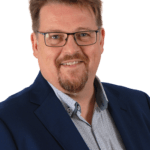 Back for I'm A Scientist - Stay At Home after 20 years away.